View image in full height View image at half height
You are here:

City walk: In the footsteps of Gutenberg

Are you just passing through Mainz or only staying for a little while and want to explore the capital of Rhineland Palatinate on your own and on foot? This virtual city walk concentrating on "the footsteps of Gutenberg" will assist your historical journey through time.

This short and direct route leads you through Johannes Gutenberg's Mainz and the end of the Middle Ages. Get to know Mainz from the point of view of the great inventor!

Johannes Gutenberg was born in Mainz around 1400 as Henne Gensfleisch zur Laden. The exact year of birth is not known, therefore 1400 is generally accepted as the year of birth. Since Gutenberg was born into a respected Patrician family, he was already schooled in reading, arithmetic, writing and Latin from an early age. A pupil with the name Henne Gensfleisch can be found in the St. Viktor Monastery Grammar School in Weisenau. Apart from that, almost nothing is known about young Gutenberg. It was verified that he lived in Strasbourg for ten years from 1434.

However, there is no proof that he already experimented there with printing, also known as "the dark art", there. In fact, he gave lessons in polishing precious stones and founded an association for making “pilgrim's mirrors” for a relic exhibition in Aachen in 1440. It was believed that these small mirrors would help catch some of the blessed light from the relics and to some extent allow people and their relatives to conserve it at home. They comprised of a larger sheet of lead-tin alloy in addition to the round mirror. Knowledge of casting techniques was imperative for their manufacture, therefore you can see the technical level in Gutenberg's experience in the serial production of several thousand mirrors culminating in letter casting for the printer.

Gutenberg was traced back to his birthplace of Mainz in 1448. As tradition tells us, he set up his first printing house at his birthplace "Zum Gutenberg".  With two loans of 800 guilder respectively provided by the Mainz businessman, Johannes Fust, Gutenberg extended his printing house. Fust became a partner.  He then went on to make the famous 42-line Gutenberg Bible, which was finished in 1455. Fust and Gutenberg were divided by an argument about money, and in the meantime, Fust continued together with Peter Schöffer in a printing house located at "Hof zum Humbrecht". The Fust-Schöfferschen printing house produced the "Mainz Psalter" in 1457 - the first book to feature a printer's sign. This first logo is still the insignia of the printer. Gutenberg continued to run a printing workshop.  There he produced the "Turkish Calendar" and the "Turkish Bull".

After the Mainz Diocesan Feud, a very fiercely dealt with dispute about the successor to the archbishop's seat, Gutenberg had to leave his hometown in 1462, but soon found a patron in the new Mainz archbishop, Adolph von Nassau. He appointed him as a courtier "in recognition of his services" in 1465. And so, Gutenberg returned to Mainz and lived there at "Algesheimer Hof" with free board and lodging until his death in 1468.

Your walk begins at a monument which concentrates on the art of scripture and printing. Gutenberg's ground-breaking invention was moveable type printing with cast metal types. Types were made of small cast lead bars with a raised and inverted letter on the end. This print type, manufactured in great numbers, enabled any text in the printing block to be put together, with which one page was printed.

The nine sandstone cubes on the monument are reminiscent of the design of these types. On the side facing the cathedral, the letters read the name "GUTENBERG". The name is reproduced using decorative letters such as in the Gutenberg Bible. Each opposite side shows the chronological order of the development of our script, from Mesopotamian cuneiform script through to the modern era.  The type monument was designed by stonemasons from the Mainz and Rheinhessen guild and given to the city of Mainz. It offers its onlookers many more interesting aspects about the art of scripture.

You now have the opportunity to pay a visit to the Gutenberg Museum which is right next to the type monument. However, you can also continue the tour and visit the museum afterwards. The tour ends here again.

Now cross over to Liebfrauenplatz, past the Nagelsäule column in the direction of an archway bearing an image of St. Martin. To the left of the archway, you will find one of the information signs which will indicate the course for the Gutenberg trail. Now wander through the arch. The entrance to the cathedral cloister is located immediately on the right.

The cloister is one of the few remaining structural documents from Gutenberg's time. It was built between 1400 and 1410 and served as a place for spiritual and religious reflection for dignitaries.  Even today, the freely accessible building exudes a quiet meditative atmosphere.  Let yourself be taken back in time to the end of the Middle Ages!

Continue to Grebenstraße via Domstraße. Walk to the right and you will reach Kirschgarten (cherry garden). The Haus zum Aschaffenberg stands among an ensemble of timber, sandstone and cobblestones. This oldest known timbered house in Mainz originated in 1500. The late medieval building was first mentioned in a document in connection with Johannes Gutenberg in 1448.  Gutenberg needed money for developing his invention. He received 150 gold guilders that his cousin, Arnold Gelthus, loaned from two citizens of Mainz. Gelthus was guarantor for the loan and gave the interest received from Haus Aschaffenberg as collateral.

Now stroll towards the cathedral again. Leichhofgasse leads to the Leichhof square, from which you have a good view of the western part of the monumental cathedral. The next stop is a little further along Schöfferstraße, past St. Johannis and on the left: Gutenbergplatz.

The present day Gutenbergplatz already ought to have been the location for a monument to the world famous inventor in 1804. On behalf of Napoleon, the French engineer, Eustache Saint-Far (1796-1826), planned a prestigious city axis as a connection between Schillerplatz and Höfchen. However the project, which began under French rule, was first completed a decade later in an altered form by the municipal architects, Augustin Wetter and Georg Moller from Darmstadt.

The city of Mainz commissioned the monument on the occasion of the probable 400 year anniversary of the invention of the printing press.

The people of Mainz finally unveiled the Gutenberg monument on 14 August 1837 in attendance of the international community. The inauguration was accompanied by three days of continuous festivities.  In addition to the unveiling parade, thousands of people followed the speeches, torchlight parades, premiers, balls and fireworks.

The design of the bronze statue was provided by the Danish sculptor, Berthel Thorvaldsen. The monument shows the inventor of the printing press, of whom there is no contemporary portrait, in an idealised depiction: bearded, elegantly dressed, with Bible and print types in his hand. Both sides of the base relief panel show work in the printing house and were also designed by Thorvaldsen. The monument was financed by donations from all over Europe. The Latin inscription also refers to this: "This monument of Johannes Gensfleich zum Gutenberg, the Mainz Patrician, was erected in 1837 by his fellow citizens from contributions given from all over Europe."

Go right past the Mainz State Theatre, crowned with modern glass architecture, and you will come straight to the old university.

A Franciscan monastery stood opposite this building in the 15th century. Gutenberg was buried in the monastery church after his death in 1468. Later the Jesuits, who had taken over the complex, had a new church built on this site by the Baroque architect, Balthasar Neumann. This and the monastery were lost when the French bombarded the city in the Napoleonic wars in 1793 - and with it all possible traces of Gutenberg's burial site. An information board hangs in a small archway on the Gutenberg trail.

Gutenberg's birthplace stands within the direct vicinity of his last resting place. Go right past the old university and a short way along Schusterstraße. The "Hof zum Gutenberg" is located on the corner of Christofsstraße.

Gutenberg was born here and later set up his first printing workshop at this location upon his return from Strasbourg. This is why this domain is still known today as "Urdruckerei" (original printing house). Like many other buildings, the site was rebuilt in the Baroque style and eventually destroyed in the Second World War. A pharmacy is located here today. Another board on the Gutenberg trail is a reminder of Mainz's most famous son.

Follow us to Christofsstraße to the St. Christoph memorial site. Gutenberg was probably christened in this early Gothic church, the origins of which date back to the 9th century. It is in the direct vicinity of his parental home. Destroyed in the Second World War, the church was renovated as a cenotaph and memorial site.

Light and glass provide a contrast to the ruins since its remodelling. Twelve brightly coloured glass slabs reflect the key points in Mainz's history. The redesigned memorial site was presented to the public on 27 February 2015 in memory of the destruction of the city of Mainz 70 years ago.

The church opens up on to Karmeliterplatz, where you will find the most modern Gutenberg statue in the city. It was created in the Gutenberg year 2000 by the Mainz sculptor, Karlheinz Oswald. The iron sculpture shows Gutenberg at the printing press. Gutenberg used a wooden press for book printing which is reminiscent of a wine press in terms of its construction, mechanics and operation.

Just a few steps further you will find the Algesheimer Hof on the corner of Christofsgasse. This is where Gutenberg spent the last years of his life. Archbishop Adolph von Nassau left the courtyard to Gutenberg as a retirement retreat. The entrance with the coat of arms is a reminder of the later owners, the Jesuits.

The tour continues to take you along Hinteren Christofsgasse and then right through Altenauergasse past the retirement home. You will reach the Mainz pedestrian zone via the footbridge. Now turn right and at the end of the passage "Am Brand" you will see the stair tower of the "Hof zum Humbrecht", built in 1584.

According to Mainz tradition, Gutenberg and Fust established the printing house here, where the Gutenberg Bible originated. The building has actually been known as the "Druckhaus" (printing house) since 1481 and housed Fust and Schöffer's workshop.

The "Haus zum Korb" was already associated with the Fust-Schöfferschen printing house in 1476. It is located a little set back from the passage. The building is one of Mainz's few late Gothic Patrician houses in good condition and gives a good impression of building design in Gutenberg's time. From "Haus zum Korb" via Korbgasse, we reach the market with the Heunensäule column before finally arriving at Liebfrauenplatz - the starting point of our tour.

If you did not already do so at the beginning, you should finish our tour with a visit to the famous Gutenberg Museum. It is the oldest museum about books, printing and writing in the world.

..can be found on the sign posts on the Gutenberg trail on each building as well as under culture&knowledge/Gutenberg. The "Historical Mainz" slabs in front of all attractions provide additional general information.

By using this website, you agree that this site uses cookies. Further information by using the following link 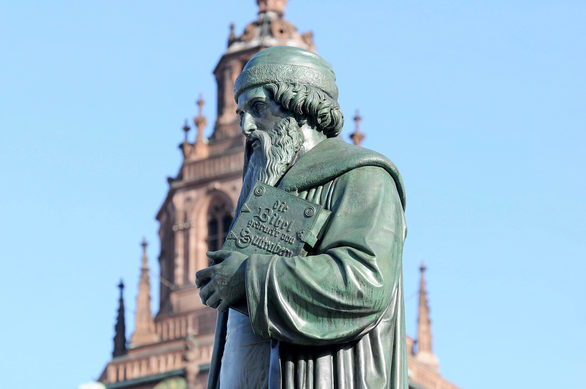